Apparently peeved by the wrong perception of the C & S Church in the public, the Cherubim & Seraphim Unification Church of Nigeria will on Saturday July 6, this year hold a Summit to re-brand and reposition the image of the Church.

The Summit, the first of its kind, will be attended by who is who in the church and in the Media profession.

The event which will hold at the Chapel of Restoration, Seraphim Land, Kilometer 40, Lagos/Ibadan expressway, Maba will also be attended by participants throughout  Nigeria, Europe and America.

Discussing the essence of the Summit with newsmen, the chairman of the Planning Committee and Chief PRO of the Unification, Snr. Supt. Apos. Muyiwa Adeyemi said the time has come for the Seraphs to start telling our stories.

Adeyemi who was supported by other members of the Planning committee including  Snr Supt Apostle. Tope Saidi, Apostle Akinbusuyi, Pastor Omololu Olabode, Special Apostle Segun Adio said we have allowed other denominations that have little experience of our Church to tell our stories and most times in negative ways.

He noted that many have been committing "fallacy of composition" by thinking that the misdeeds of the few represent the essence of the Holy Order.

The Chief PRO who is an Editor in a National Newspaper said the summit is to reposition and re-brand the church and also to identify people propagating the gospel in a seraphic way. This is to bring everyone doing great things through the media in the church so as to recognize, harmonize, patronize and set out rules and regulations to abide with. There will also be accreditation for people doing things worth while for the church and they will be recognized  by the National Executive Council through the office of the PRO.

He disclosed that during the last conference hosted by the Faith Mission C&S Church, the Supreme Head, His Most Eminence Pro. Dr. Solomon Adeboyega Alao (JP) set out three agenda to be achieved this year. The second agenda is to re-invigorate the media of the church to make sure we have fair mentioning in the public space and to correct wrong  perspective people have heard about the church.

He said,  "the summit is to bring all media practitioners together in a one-day affair where  there would be lectures and syndicate group to bring out resolution and blueprint required by NEC to plan the re-branding of the church.

The Summit will be attended by all the Secretaries of constituent churches and two members of the PR Unit of the church. The programme is just like "train the trainers" in which what they are taught will be passed on to their local churches.

All Seraphs who are practicing journalists  either in print, electronics, or new media are also expected at the Summit. The main purpose of this event  is to unify their operations and to ensure they work together in sending right messages  to the world about the church.

The theme of the summit is "Who do People say I am" from the book of Mark 8:27-30. The Chief PRO explained that when Jesus asked his disciples this question, he was surprised with their responses until Holy Spirit revealed it to Peter. He said the same thing is happening now because many members of the Church do not know the essence of the church and they send wrong messages to the public.

Four papers will be delivered at the event.

The first lecture will be delivered by Sp. Apos. Akin Owolabi - Perception of Cherubim and Seraphim in the public space.

The second lecture - Mass media and the church in the in the 21st century will be delivered by the former Editor of Punch and presently the Provost of Nigeria Institute of Journalism (NIJ)  Mr. Gbemiga Ogunleye.

The third lecture: The Role of New Media in propagating the gospel  by Biodun Ogunleye while the fourth lecture: Effective Management of Church Publicity in the 21st Century will be delivered by Otunba Dele Momodu, Publisher Ovation Magazine.

He said, "There will be a lot of media gurus at the event so after the lectures we would have a syndicate group of three to bring out the resolution that will form the document for  rebranding  of the church. It is free but it is going to be serious business for the egg-heads. Free breakfast and lunch will be served while all participants at the business session  will have certificate of attendance. 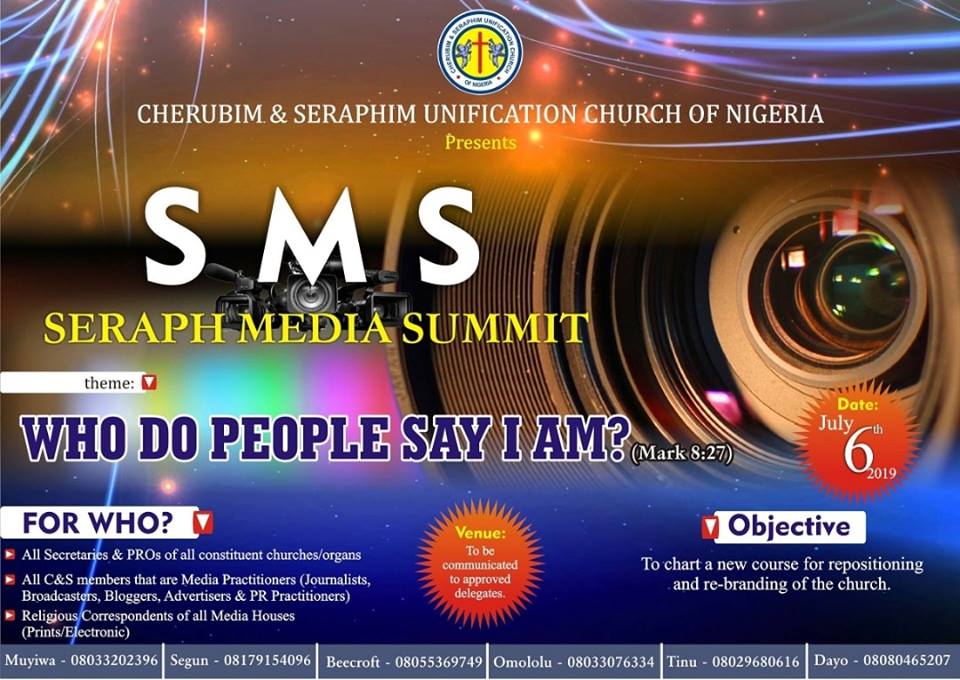 “Vote based on credibility, not emotions”, Baba Olori Implore members