Facts about the use of Menorah in C&S Church

Menorah is part of the Cherubim and Seraphim Church worship materials which many generations have grown up to know. It has been used in the past by our fathers and it's still in use even till this present age. Although, some people have stopped it's usage, they believe and know that it's part of the C&S church worship materials.
Candles have been used in the past and its still in use in some parts of the world(especially the South-Eastern parts of Nigeria); but due to the advancement in technology, electric light bulbs are the commonest these days.
Having established the importance of Menorah in the C&S church, it's such a pity that so many C&S youths do not know how we came about using the Menorah, it's significance of the Menorah, and what it represents. Many even have several misconsptions about it....
I enjoin you to follow us on this series as we take a closer look at this subject matter! 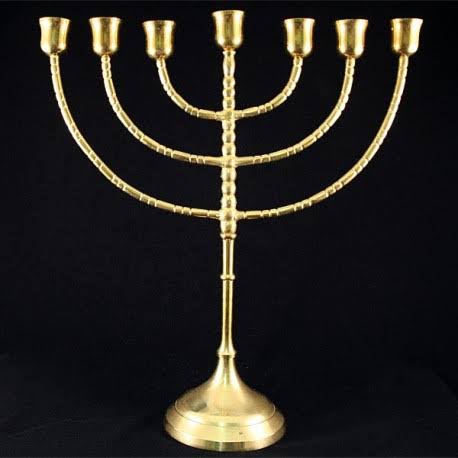 HOW DID MENORAH COME INTO EXITENCE?
In Exodus 34, we were to understand that God called Moses up to Mount Sinai the second time after he had broken the first tablets(on which he wrote the commandments), telling him to chisel out two stone tablets, so he'd come up to the mountain to receive the ten commandments
At the mountain, God gave some series of instructions and ordinance to Moses. (Exodus 34:27) and as a result of this conversation, we could see that Moses' experienced the manifestation and utmost presence of God, which was even evident to the Israelites (Exodus 34:29-35).
We see that part of the instructions God gave to Moses were to make available the materials needed in the Tabernacle which he related to the Israelites (Exodus 35:1). Among the materials God commanded Moses to be present in the tabernacle is Menorah(Exodus 35:14).

The word MENORAH in Hebrew means "Lamp". It's a lamp stand made of pure gold, six branches extended from sides of the lampstand (three on one side, three on the order side).  This six branches were connect together by the lampstand which makes it seven (Exodus 37:17-24, 25:31-40).
Then, in Exodus 40:24-25, we were told that Moses set the lampstand and lit it before the Lord as He had commanded him.

THE SIGNIFICANT OF MENORAH
One of the revelations to John the beloved in Chapter 4:5b was “Seven Lamps burning before the throne which are the Seven Spirit of God”.
From our previous discussion, we could see that even before God commanded Moses to set up the Tabernacle, there has been an Ordinance in heaven of which God wants to be replicated here on earth (Mathew 6:10) .
We have seen that the seven lamps represents the Seven Spirit of God according to Revelation 4:5.
On this note, I will say that Menorah symbolically represents the Presence of God.
That is not to mean that it is only when we have a menorah that we can feel/sense/know that God is present because Jesus Christ, who is full of Grace and Truth. Who through Him, Grace has appear to us all became a carrier of God’s Presence wherever He went. He said in John 9:5 “as long as I am in the World, I am the light of the World” which implies that He became the carrier of God’s Presence. Hence,  the light to the world!
Therefore, as children of the Most High, we ought to be carrier of God’s Presence wherever we go.

In conclusion, Menorah (Lamp) used as a doctrine in C&S is not used so as to beautify our alter neither is it used because our fathers used it nor that we want our denomination to look different from others but it is used because it is part of the Ordinance in heaven which signifies THE PRESENCE OF GOD TO MAN.